Conservation  |  11.04.21
The Wildlife (and Conservation Heros) who bring hope for the Holidays

As we enter another holiday season, and the end to 2021, I am particularly grateful for one group of people especially: our conservation partners.

The real heroes of 2021 (and beyond!) are the leaders and staff at Lewa Wildlife Conservancy, the Sheldrick Wildlife Trust and Ol Pejeta Conservancy. They are persevering through incredibly challenging times of restricted personnel, resources and support.

And they continue to do what must be done to protect our most vulnerable wildlife.

Each staff member plays a vital role and has their own story. Like Emilio, at Ol Pejeta; Joseph, at Lewa Wildlife; and Symon, at the Sheldrick Trust—just to name a few.

And like each caretaker and protector at these outstanding organizations, each animal has their own story.

In this year’s gift guide, we’re sharing the stories of elephants, rhinos and more that I’ve had the pleasure of getting to know—as well as the memories of capturing these majestic animals in action.

After more than a year of restricted travel, these images of threatened and endangered wildlife have taken on new meaning for me. I long to get back to Africa, back to the presence of these wild, beautiful beings.

But even when we can’t visit, these fine art photographs are an evergreen hope for threatened and endangered wildlife.

They remind me of the sustaining power of natural beauty.

They tell the story of the continued work of our partners.

And they support a future where wildlife roam freely and protected.

The best news this holiday season is that you don’t have to be there to make a difference.

When you purchase one of these fine art photographic prints, 20% of the sale is directly donated to our heroes—the conservation partner of that Series.

More than anything this holiday season, I want to continue to support vulnerable animals and the people at Lewa, Ol Pejeta and the Sheldrick Trust who work every day to protect them.

You don’t have to be there to make a difference.

You can make that impact too, by bringing these fine art photographic prints—and their stories—into your home. Or, by giving the gift of art + conservation.

Read the stories of our friends—furry and otherwise—below, and consider gifting one of these prints as an expression of your heart toward endangered wildlife, the people working to protect them and the impact we can have when we work together.

This season, celebrate the resilience of our partners, of the animals in their care and of our ability—blessed as we are—to support them.

Here are their stories... 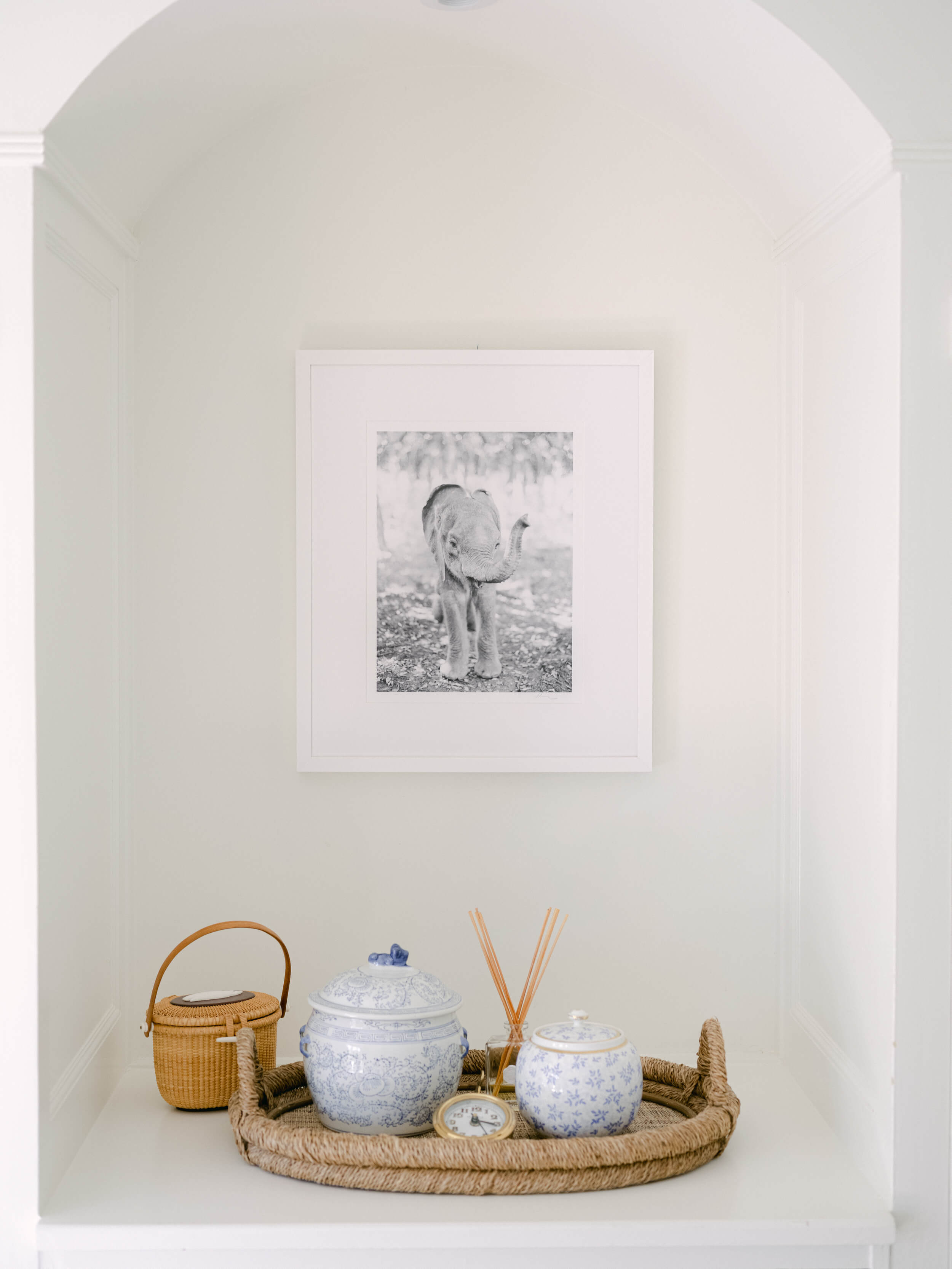 We will always cherish the memory and legacy of the ‘Lionheart’ Luggard, who sadly passed away this past summer. He was the epitome of resilience, having survived traumatic injuries. A bullet wound shattered his right hind leg and injured his left foot in 2016 when he was just an infant. His determination and positive spirit, in the face of all he had suffered, inspired everyone at the Sheldrick Nursery. And his loss earlier this year was a heartbreaking blow to all who knew, and knew of, him.

I’ll never forget meeting Luggard. This was such a special moment. We had just watched the keepers share milk with all of the young elephants and they had gathered in a more wooded area. This darling little elephant walked right up to me, raised his trunk and let out the tiniest little trumpet as if to announce his arrival.

We will never forget “the heartbeat of Umani” Springs, the reintegration unit where he lived.

You can preserve the memory and bravery of this little elephant with a commemorative fine art print of our ‘Tiny Trumpeter.’ 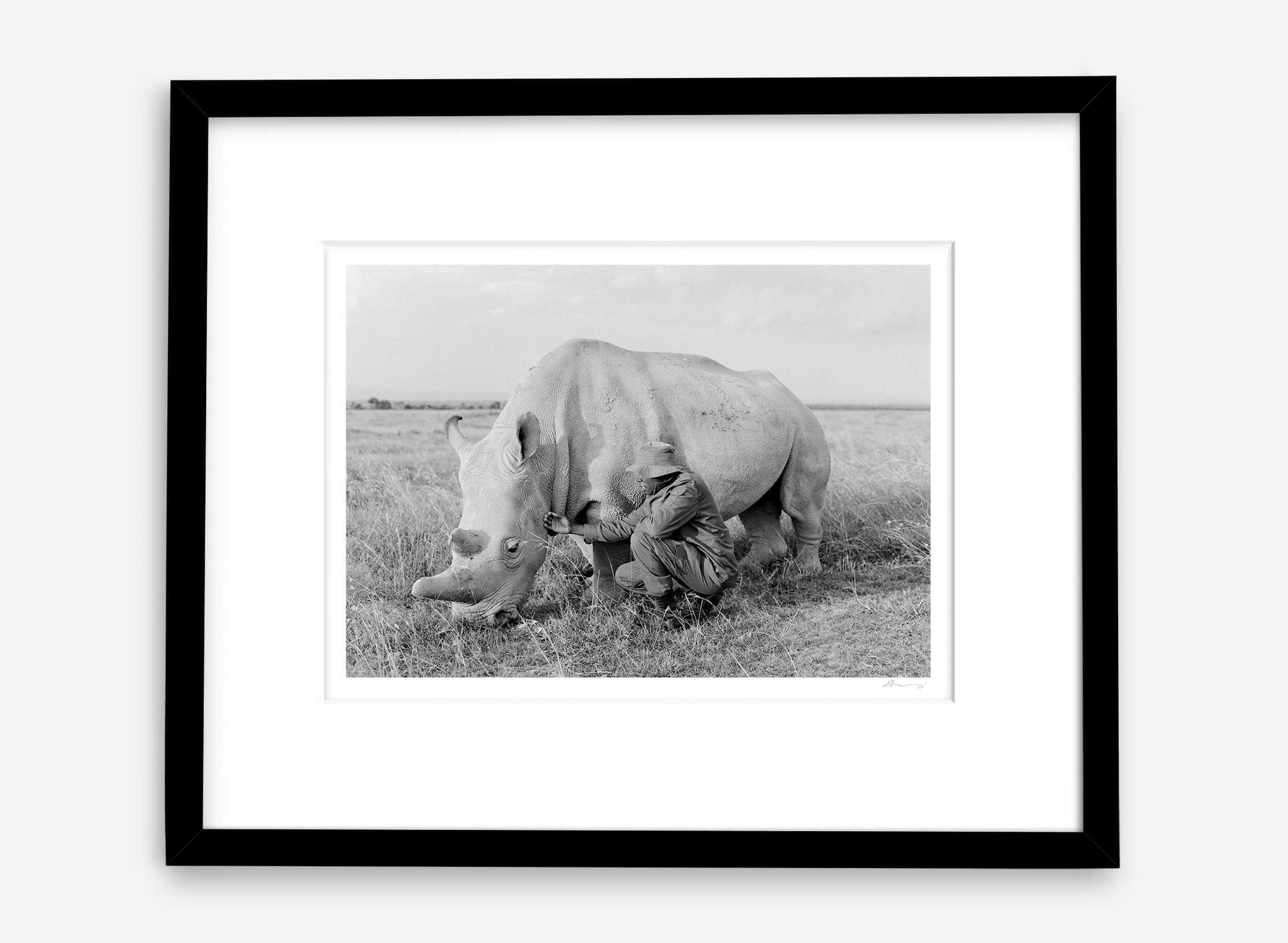 James (pictured here) was one of the dedicated caretakers of the last male northern white rhino, Sudan. And is a former caretaker of Sudan’s daughter and granddaughter—the two remaining northern white rhinos, Najin and Fatu. I had the privilege of meeting and photographing James when I visited Ol Pejeta and met these two incredible rhinos. His dedication and passion continues to inspire so many around the world.

In a wonderful profile by the New York Times, he shared his mission:

"He promised the dying rhino [Sudan] that he would share the tragedy of the northern whites with the rest of the world — that he would convert that sorrow into an energy that might help rescue other species."

He is certainly using his voice and energy to continue to share their story and express his devotion to wildlife. 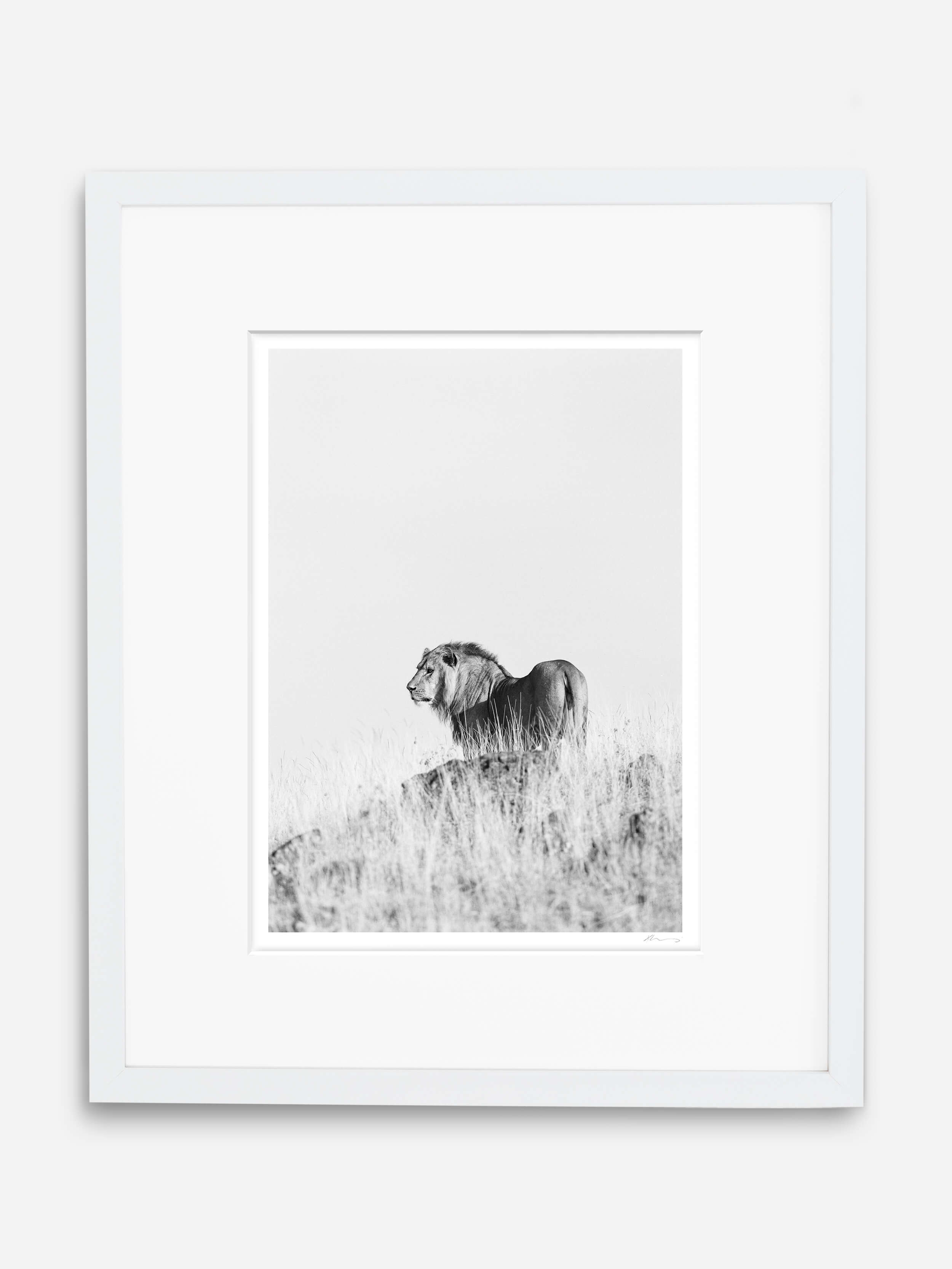 When our guide spotted the lions climbing a hill, he quickly turned the vehicle off the dirt road and into the bush and up we went. The lion was calm, slowly making his way upward, not bothered by the sound of the vehicle at all. When he reached the top of the hillside, he paused to survey the landscape.

I’m always struck by how fascinating lions are to watch. They have a serene, calming energy that gives them an eternal look of contentment. This lion climbed to the top of the hilltop to survey the landscape and it was incredible to watch him take it all in. 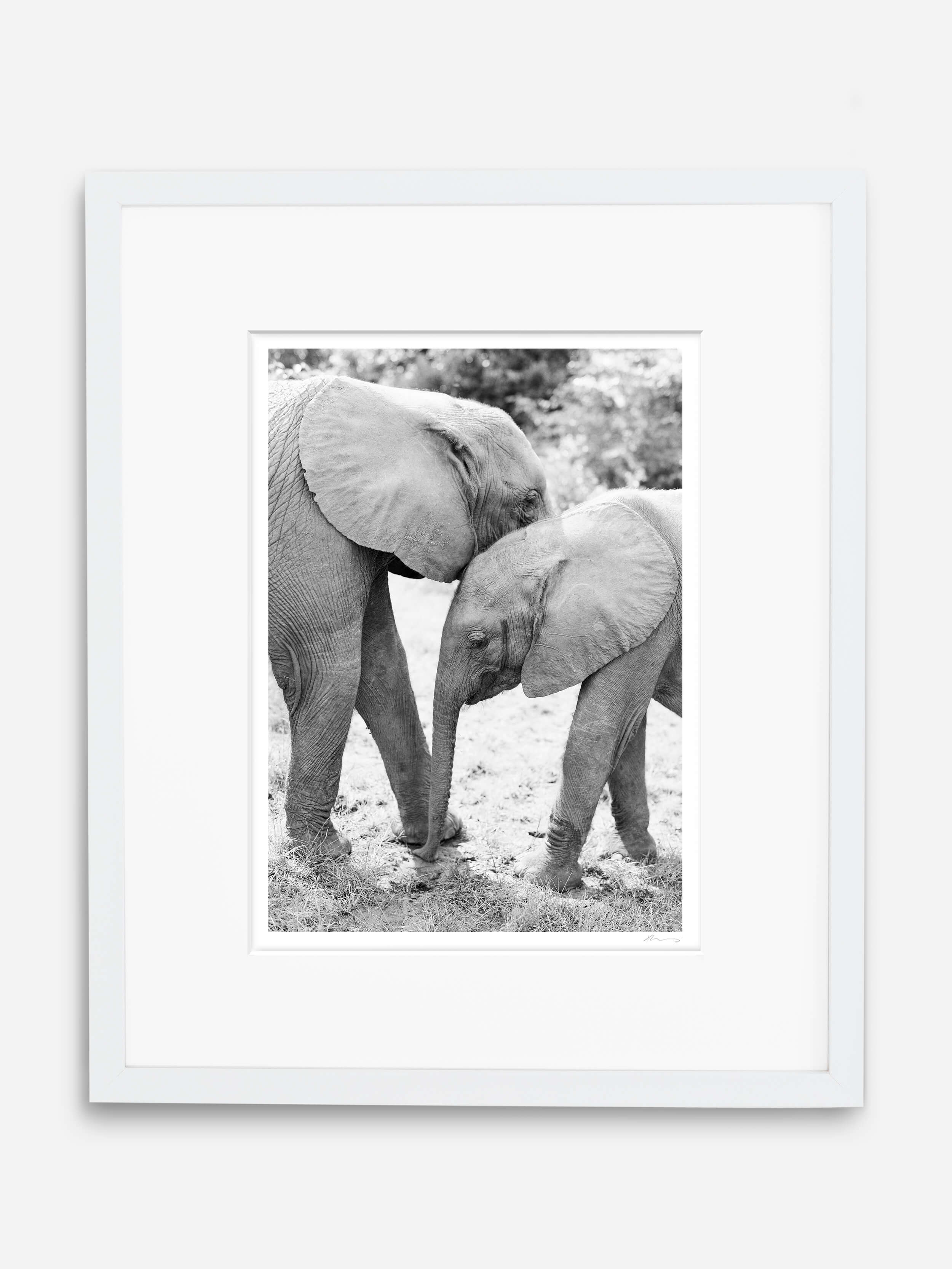 In 2014, after a member of Mbegu’s herd killed a woman and was shot by KWS rangers, the rest of the herd stampeded away, leaving Mbegu trampled and forgotten. Without a herd to protect her, the angry community lashed out at baby Mbegu, spearing and stoning her in revenge. Gratefully, the warden of the local Naibunga Conservancy rescued the calf and alerted Angela Sheldrick to the situation.

Despite the horrific trauma she had endured that day, Mbegu (pictured left) clung to life and responded well to the care she received from the warden and keepers. She has even become a caretaker, teacher and sister herself to younger orphans like Ngilai, picture on the right.

One of the Keepers at the Sheldrick Nursery gave her the nickname ‘tiny seed’ because she was the smallest orphan in the stables. ‘Seed’ in Swahili is ‘Mbegu,’ which is how this little one got her name...a fitting symbol for a calf that escaped death and was given another chance at life.

Najin and Fatu remain the only northern white rhinos in the world.

Photographing them was so special because we walked alongside them in the tall grass, observing them go about their day. Their bond was clear as they never were more than a few steps from one another.

Being the last two northern white rhinos in the world, and now part of an in-vitro fertilization program aimed at saving the species, there is so much hope placed on these two. The conservation efforts continue, with milestone successes along the way. And I am hopeful that these two will indeed become “the mothers” of generations of northern white rhinos to come. 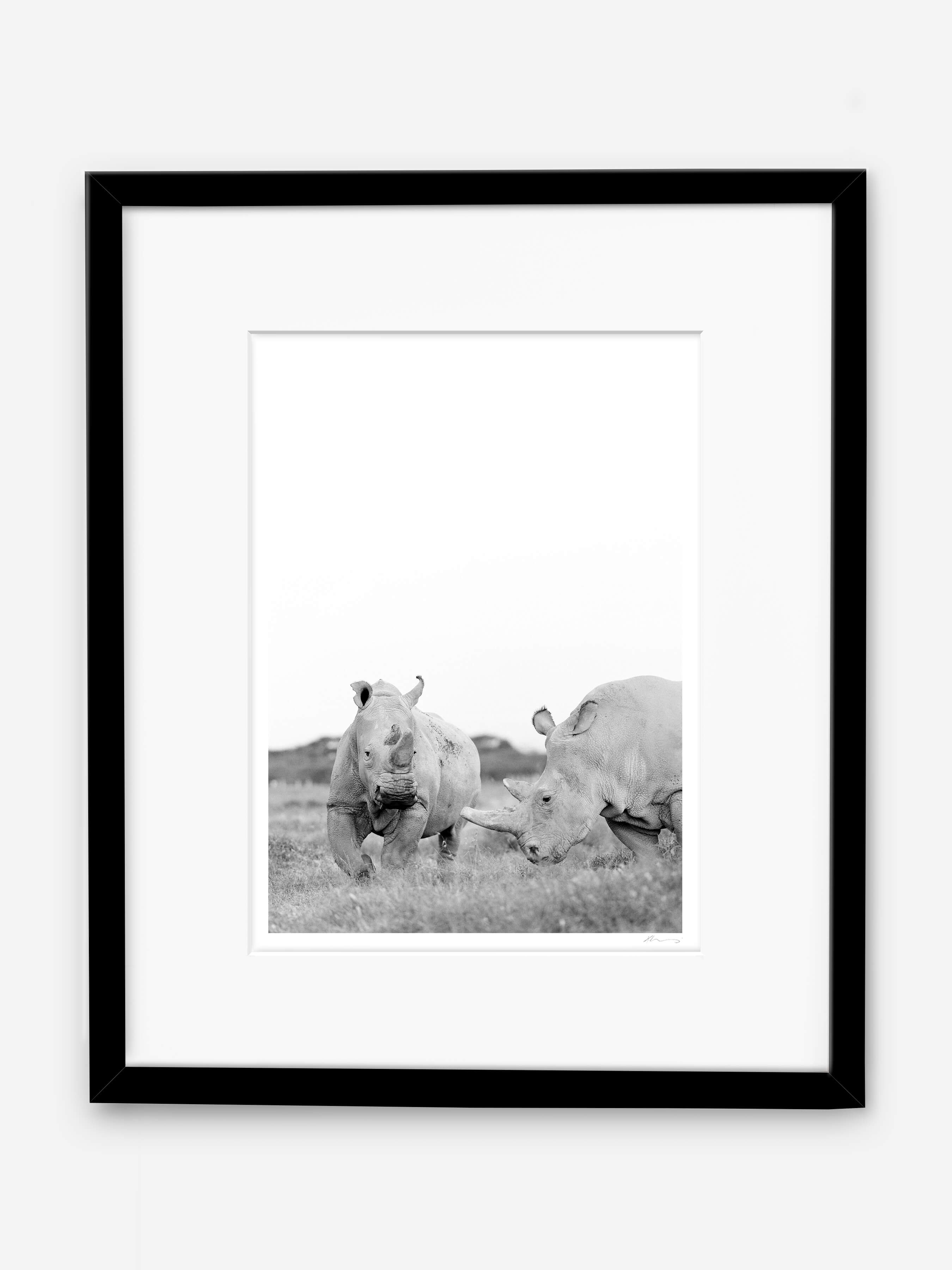 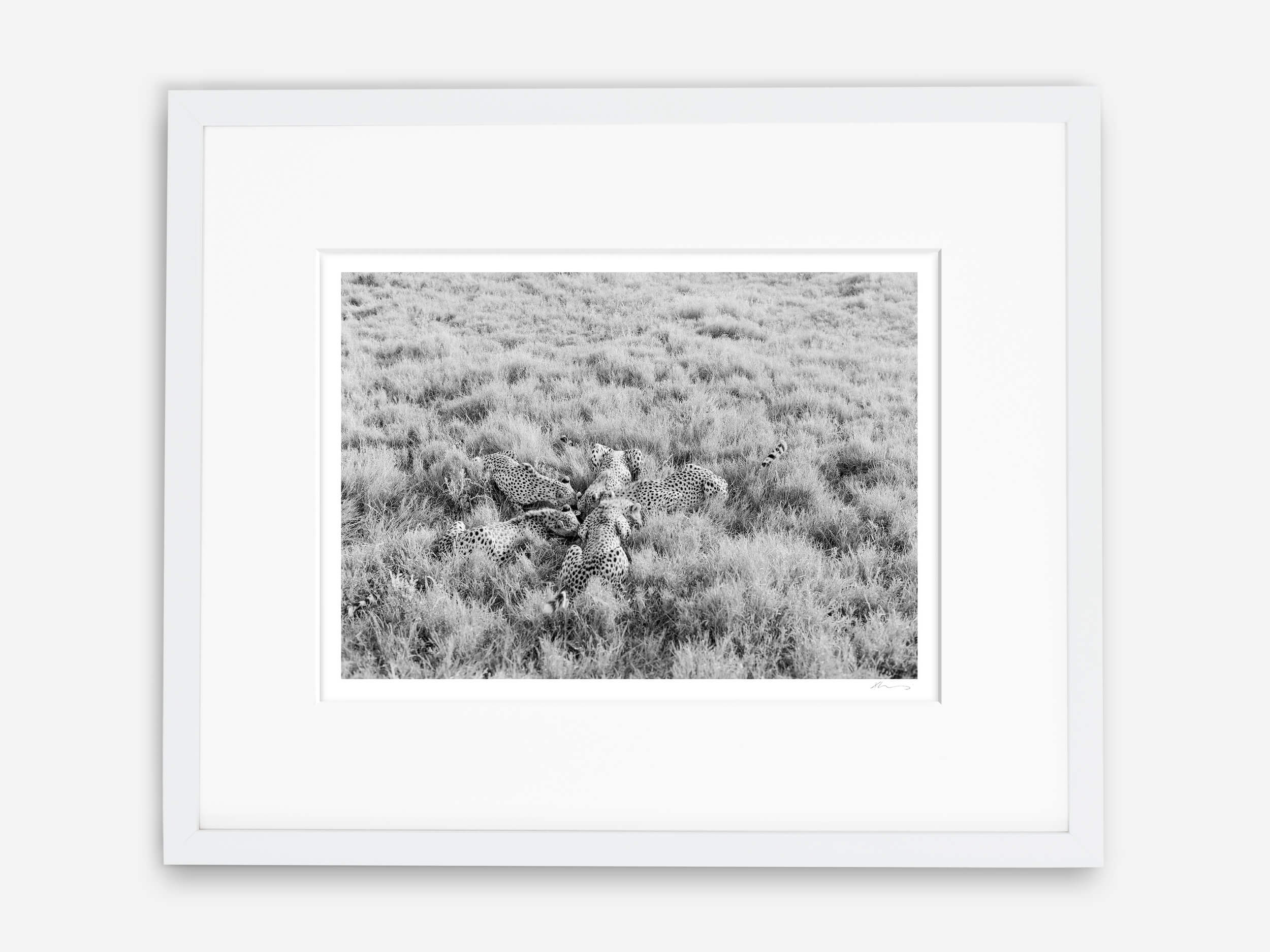 When I captured this photograph, we had been following this family of cheetahs, a mom and her growing sons. And when they finally made their kill, it was very special to see how their hard work of tracking and chasing led to dinner for the whole family.

They are so beautiful to watch. It seemed that they were either basking in the sun or at a full sprint after prey; there wasn’t much in-between these two speeds. A beautiful example of balance. 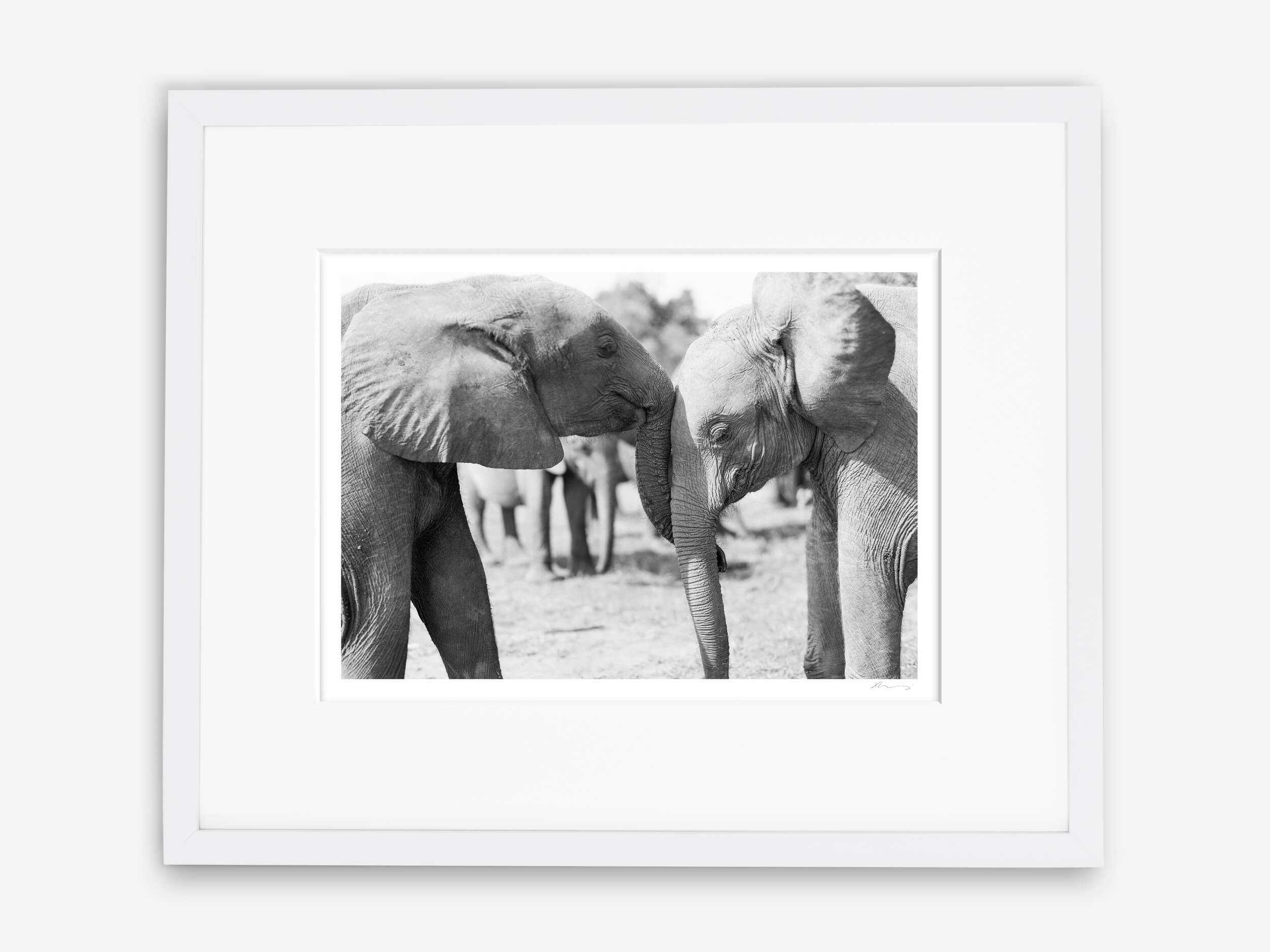 In August 2015, Godoma (pictured right) was rescued from the bottom of a well. Battered and bruised from the steep fall, Godoma was apprehensive of the Conservancy scouts who arrived to rescue her. Hoping to reconnect the five-month-old calf with her herd, they released her back into the wild and observed her from afar.

But sweet Godoma was lost, confused, and utterly abandoned. The elephant Keepers were finally called to her rescue when she was observed trailing a herd of zebra and a few buffalo. Her first night in the Nursery, Godoma cried through the night, missing her family and uncertain of her unfamiliar surroundings.

In the five+ years since her rescue, Godoma has recovered well physically but is still suffering from the emotional scars of her traumatic youth. She is typically shy and reserved, remaining on the fringes of the group when roaming or gathering with other orphans. But each day, Godoma grows more confident and comfortable with her newfound herd and friends like Rapa (pictured left) who play affectionately with her.

Thanks to the camaraderie of her fellow orphans and the care of their loyal Keepers, Godoma is thriving at Sheldrick Wildlife Trust. 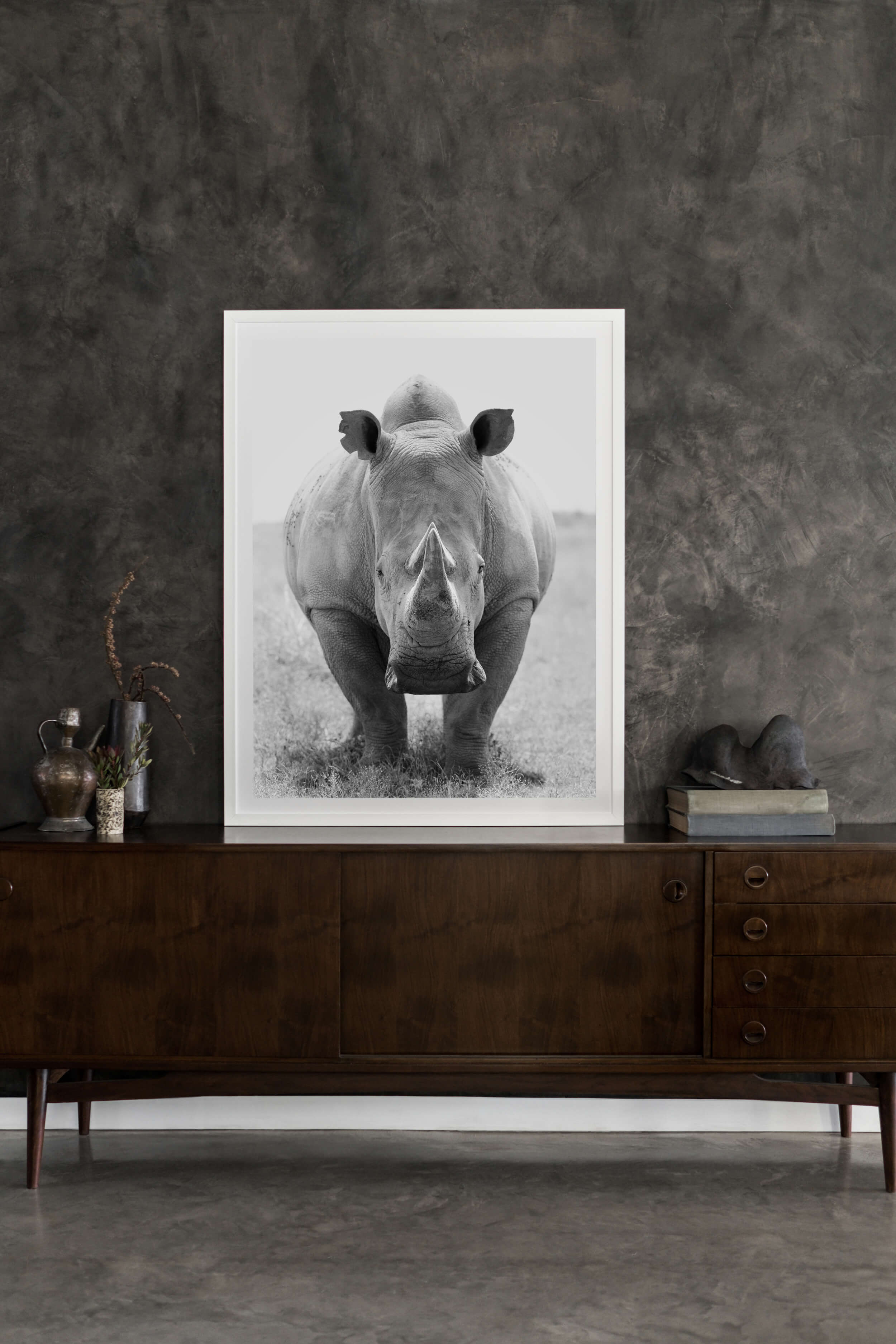 Tauwo serves as a critical companion for Najin and Fatu. Although rhinos are notoriously independent creatures, white rhinos have the most complex social structure and are known for being the most social.

Having a companion like Tauwo has entertained and revitalized the solitary females, while potentially giving their subspecies a chance for survival. And since males are also known to be much more aggressive than their female counterparts, Tauwo helps to protect Najin and Fatu from danger, like “the guardian” he is. 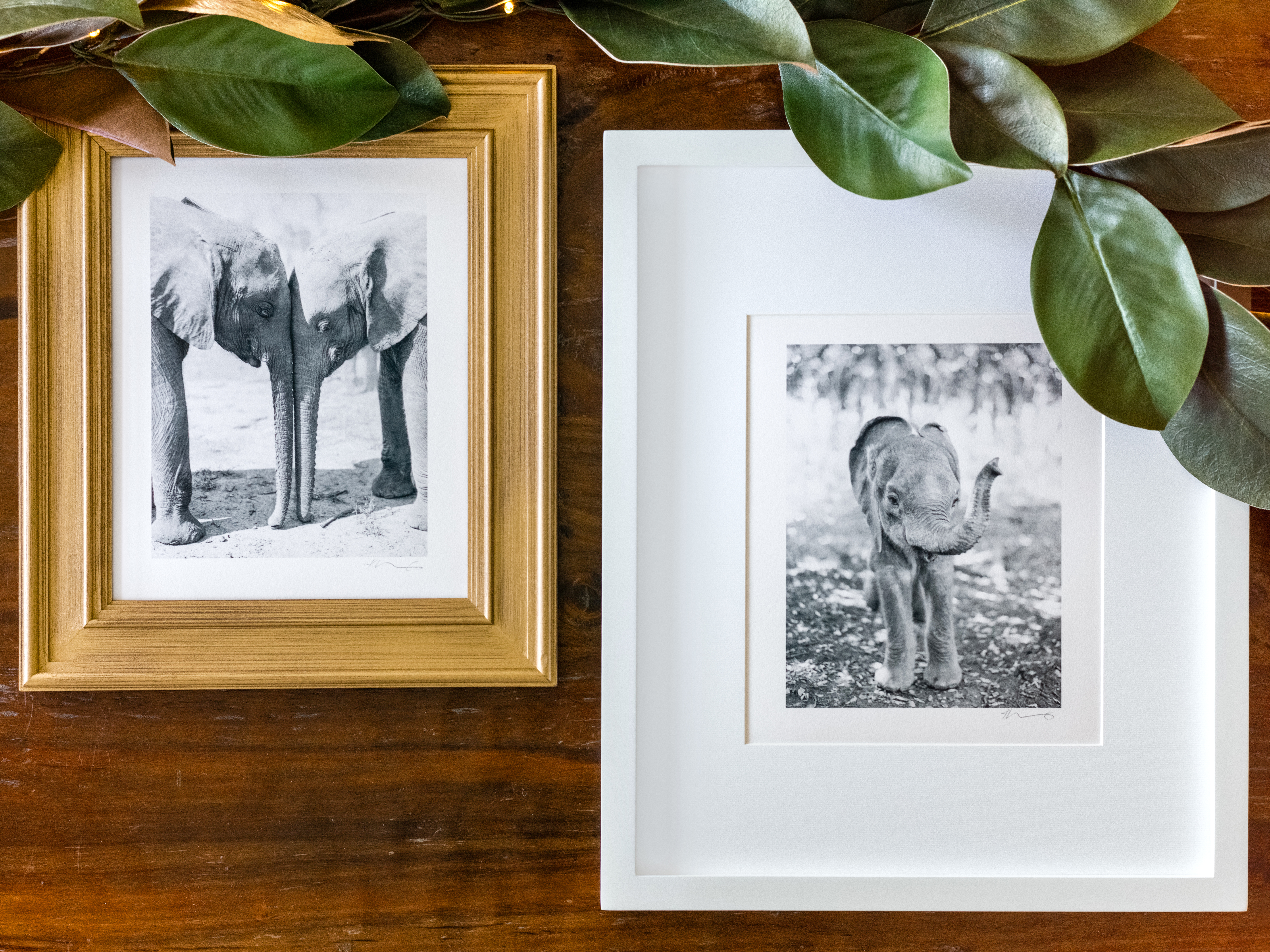