This Endangered Species Day, we want to draw attention to the silent extinction that’s been happening for decades now. The giraffe is slowly disappearing, with few left in the wild, and they need our support to survive. We aim to educate readers on the subspecies of giraffes and their particular plight. Scroll to the bottom for practical ways to help the endangered giraffe today.

Though the giraffe is one the most well known and beloved species of wildlife, they have been silently slipping into extinction for the past few decades. Now half, and even as much as 95%, below populations three decades ago, the giraffe’s plight can no longer be ignored. We aim to bring awareness of endangered giraffes and their dwindling numbers to the forefront and to equip you with practical ways you can be a part of their survival.

Due to the historical lack of focused conservation efforts for the giraffe, information regarding their behaviors and biological makeup is scattered and incongruent. Even scientific experts don’t fully agree on how many subspecies there are. There are populations of giraffes that were never before tallied until just a few years ago.

Now that the conservation community understands the dire predicament of giraffes, more efforts have been laser-focused on their protection. And therefore, more information is available on where they are, how many there are, and where they range.

We also understand the problems they face. Not unlike other wildlife, their greatest threats are habitat loss, for various reasons, and poaching.

"GIRAFFE FACE THE SAME PROBLEMS THAT OTHER WILDLIFE SPECIES DO. IT'S JUST THAT THEY'VE BEEN OVERLOOKED."

Below, you will find information on the four most endangered subspecies of giraffe to date. Included in our list is the Rothschild giraffe, who was previously recognized as its own subspecies. It is now commonly included with the Nubian giraffe subspecies of Northern giraffe. While this inclusion may appear to strengthen the numbers of the Nubian giraffe, we wanted to make a distinction for the continued plight of the unique Rothschild giraffe.

Below this list, you will find ways to help these endangered species. Do one, do all, but do something. The giraffe could disappear in our lifetime; something I never want to see happen. But if we act now, with determination and commitment, we may be able to preserve them for generations to come.

Possibly the most recognizable of the giraffes, the Reticulated giraffe’s appearance is in its name. Well-known for the striking white lines that frame its orangey-brown patches, this species’s patches extend all the way down its legs.

It is estimated that there are currently less than 16,000 Reticulated giraffes in the wild. They range across northern and north-eastern Kenya, and small restricted populations most likely persist in southern Somalia and Ethiopia. Since 2018, numbers appear to be increasing across northern Kenya.

Perhaps the most iconic of giraffes, the Reticulated giraffe faces several threats to its survival. Because of their size, the large animal produces great amounts of meat for poachers and they are relatively easy to kill with a gun or a snare. Land development and agricultural use of the land has contributed to habitat loss for this subspecies. And competition from a comparably-sized herbivore, the camel, has them contesting for food and water. This new addition of livestock to their habitat creates overlap and over-grazing for the giraffe. 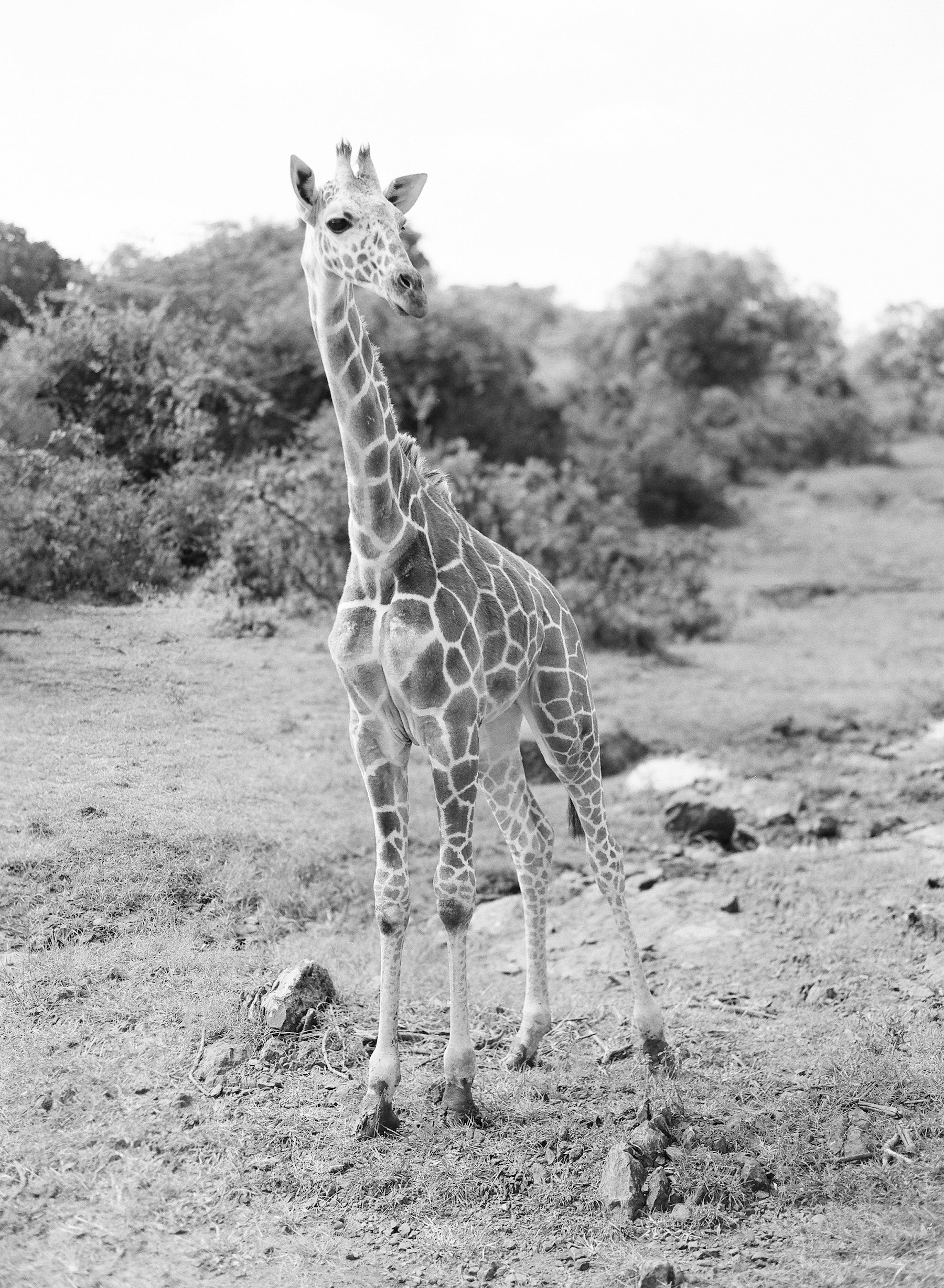 With large, dark brown patches that have jagged, uneven edges, the Masai giraffe is noticeably darker than the other species of giraffe. Like the Reticulated species, their patches continue down their legs. They are the largest-bodied giraffe species; fittingly, they are also known as the Kilimanjaro giraffe.

The Masai giraffes range across central and southern Kenya; throughout Tanzania; and an isolated population exists in the South Luangwa Valley in northeastern Zambia.

The Masai giraffe is also victim to increased poaching in response to an increased demand for giraffe products and parts. Few of them survive outside of protected areas. Due to the illegal hunting, there are an estimated 35,000 left in the wild. This is less than half of the population from three decades ago. The Kordofan giraffe, like other Northern subspecies of giraffes, has no markings on its lower legs. It exhibits small, pale, irregular patches—in contrast to the Masai giraffe. Like all giraffes, they are herbivores. They eat from the acacia, mimosa and wild apricot trees at their reach. Their strong and rough tongues are able to easily strip the leaves from a branch, avoiding any unwanted thorns.

Like almost all four subspecies of giraffe, the Kordofan suffers the effects of illegal hunting or poaching, habitat loss and destruction and civil unrest. There are approximately 2,000 left, a decline of 80% within the last three decades. This decline is largely due to the hostile regions they live in: southern Chad, Central African Republic, northern Cameroon, northern Democratic Republic of Congo, and western South Sudan.

The Nubian giraffe is recognized by its more rectangular, chestnut-brown patches set against ivory or creamed-colored hair. They have no markings on their lower legs. There are approximately 3,000 remaining, at an estimated 95% drop in the last three decades.

Nubian giraffes range in western Ethiopia, eastern South Sudan, and pockets of Kenya and Uganda. Most live outside of their natural range due to the conservation efforts to establish viable populations.

Increased poaching in Ethiopia and South Sudan have contributed to their decline. Agricultural development has eradicated the wild populations of Nubian giraffes in Kenya. Most of them can now only be found in the National Parks, private reserves or protected areas, making it difficult for interbreeding to occur without the coordinated efforts of conservationists.

The formerly recognized Rothschild giraffe was named in honor of Lionel Walter Rothschild, a British banker, politician and zoologist. When he opened his private museum in 1892, he had the largest zoological collection ever assembled by a private individual.

And though genetically identical to the Nubian giraffe, the Rothschild’s is the only giraffe that is born with five ossicones. Ossicones are the horn-like protrusions on the head of a giraffe. They are born with them, and most giraffes have two distinct ossicones at the back of the head and often one between the eyes. A Rothschild’s giraffe has an additional two behind each ear.

Ranging in eastern Uganda and western Kenya, there were an estimated 1,600 Rothschild’s giraffes in the wild in 2016. They face the same constant challenges as the other subspecies: loss of habitat to human development and agriculture; drought; illegal poaching; and civil conflict and unrest. 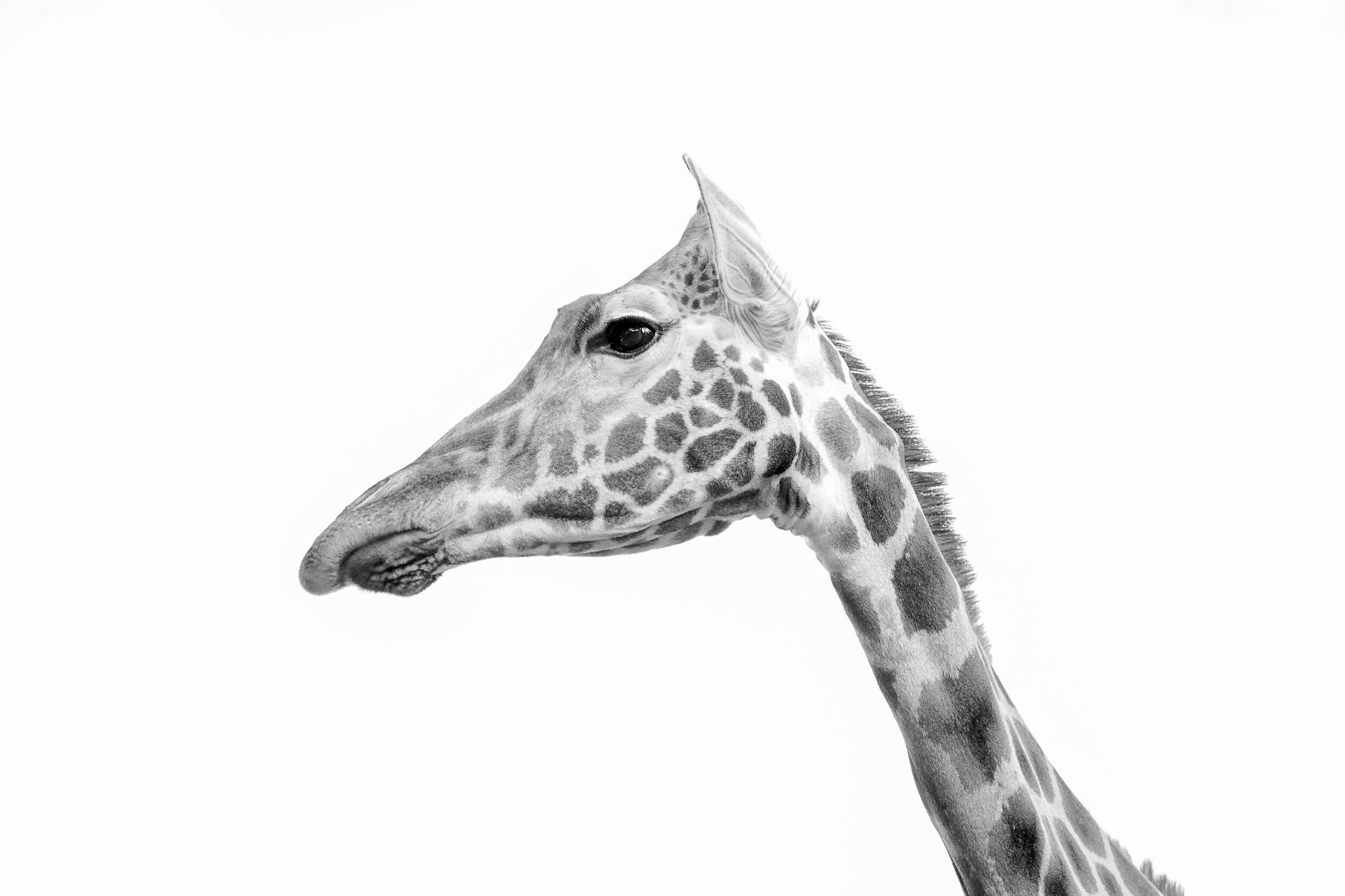 One of the most well-known herds of Rothschild’s giraffes reside at the Giraffe Manor in Nairobi, Kenya. Chad and I have had the enormous pleasure of observing the protected Rothschild giraffes that freely roam the 12-acre manor. Since 1974, Giraffe Manor has provided a sanctuary for the indigenous Rothschild Giraffe and has been a champion for this species. 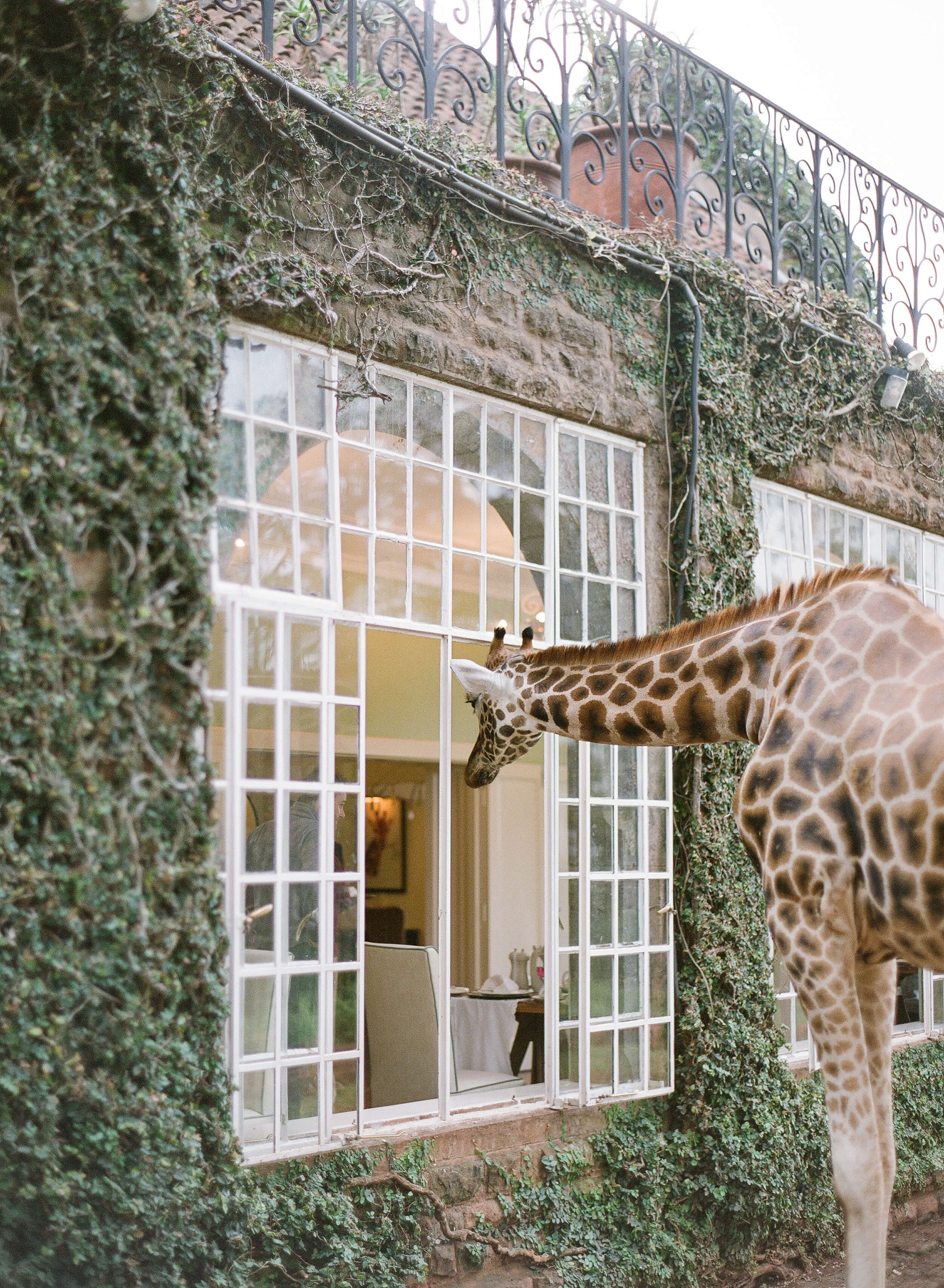 A very personal way to make a difference is by ‘adopting’ or sponsoring a giraffe from a reputable conservation organization. When he was just a few days old, little Kiko was rescued by the Kenya Wildlife Services and taken to the care of the Sheldrick Wildlife Trust. When you adopt him, you receive monthly updates on his well-being as well as photos of his progress and notes from his Keepers’ diaries.

The Giraffe Manor conservation program offers the special opportunity of Giraffe Sponsorship. Your yearly fee supports their giraffe family—check out Lily, Jock, Daisy, Edd and more here!—as well as the The Giraffe Conservation Foundation, the only non-profit organization that focuses solely on giraffe conservation in Africa. 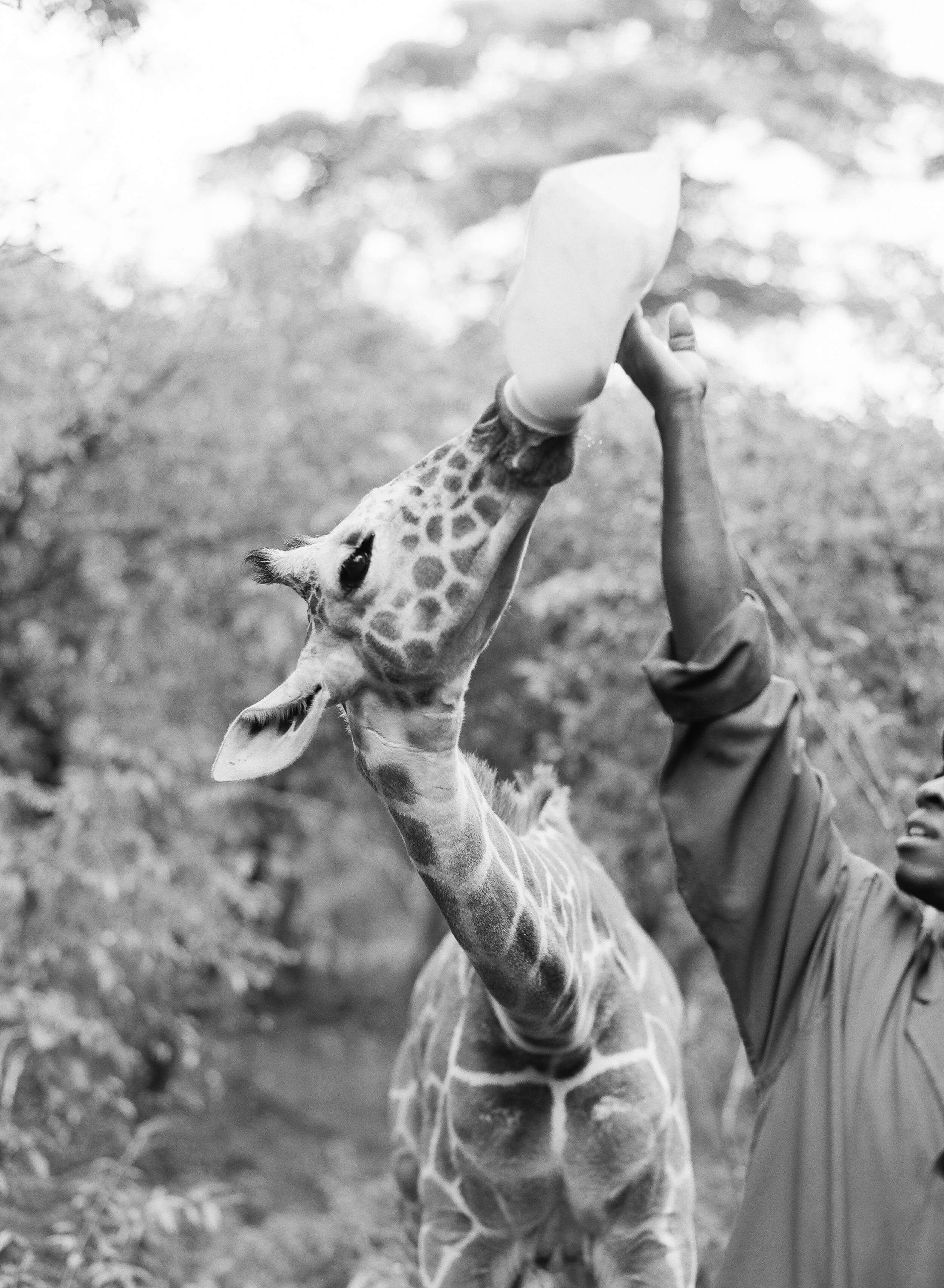 Poaching is one of the #1 threats that all wildlife face—including the giraffe. They are poached for their meat, their skins, hair and tails. Giraffe tails are highly valued by many African cultures as good-luck charms. They are incorporated into bracelets and decorative charms and used as thread for sewing.

Here in the U.S., items such as rugs, jewelry, clothing, and the most common—western-style boots—create an ongoing demand for giraffe parts, putting pressure on the species. And the sale of these items is still legal.

A coalition of conservation groups filed a petition with the U.S. Fish and Wildlife Service in 2017, requesting that giraffes be added to their list of endangered wildlife under the Endangered Species Act. The petition is currently in its final phases of review, taking public comments from the scientific community until December 31, 2020.

When I created Render Loyalty, I decided that I would use what I had to offer—my skills, expertise and craft—to give back. I was already taking award-winning fine art photographs; why not use them for the causes I cared about?

My fine art photographic prints are a dedication to the wildlife I’m passionate about protecting. And I wanted other lovers of art and wildlife to be able to express their passion for conservation in this way too.

When you decorate your home or adorn your walls, or even select thoughtful gifts for your loved ones, you can make a bigger impact by choosing art that gives back. 20% of all sales from my fine art prints are directly donated to the conservation organizations and the animals they protect.

When you display the things you care about on your walls, you open the door for conversation and for bringing awareness to endangered species like the giraffe. 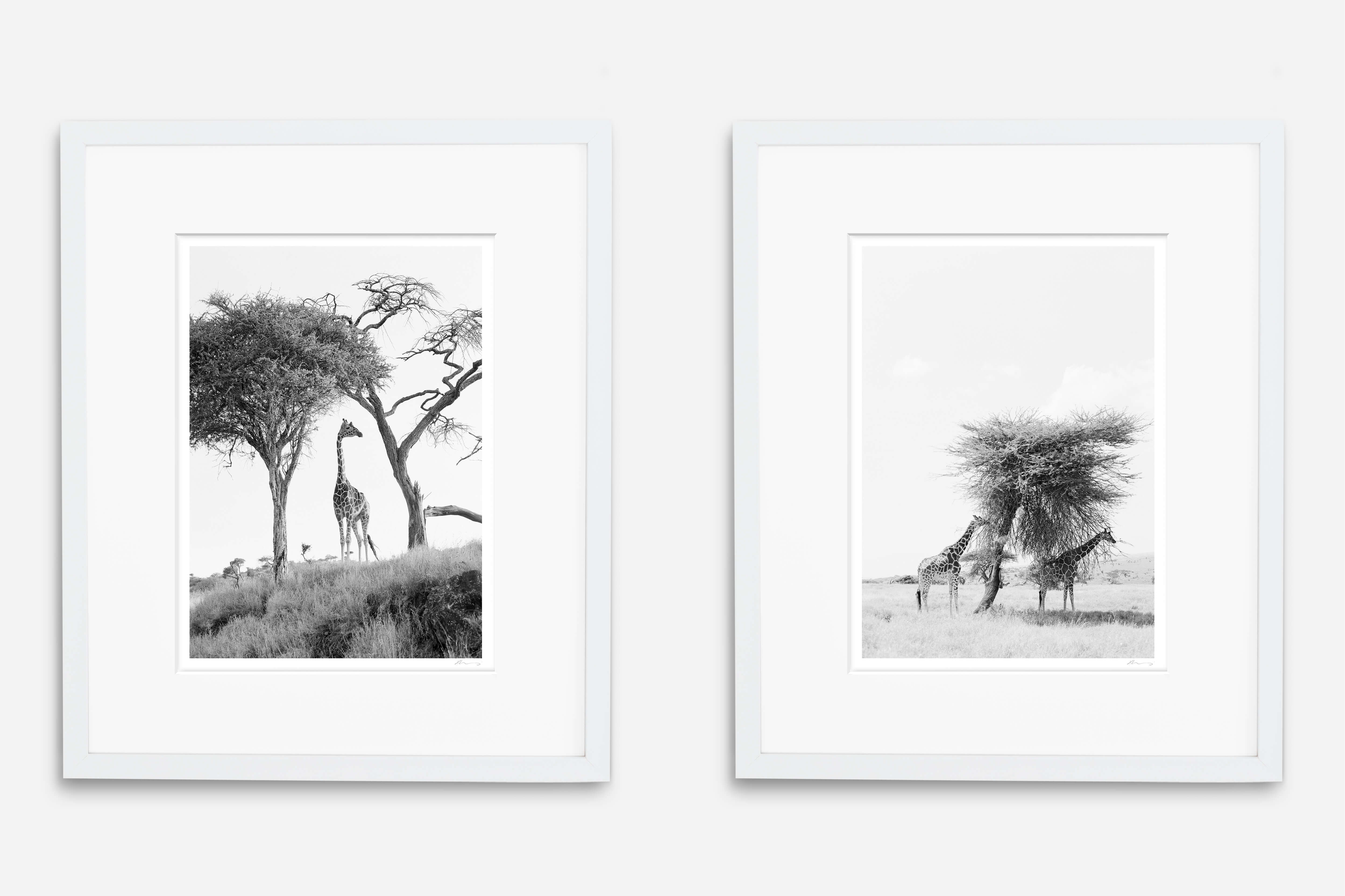 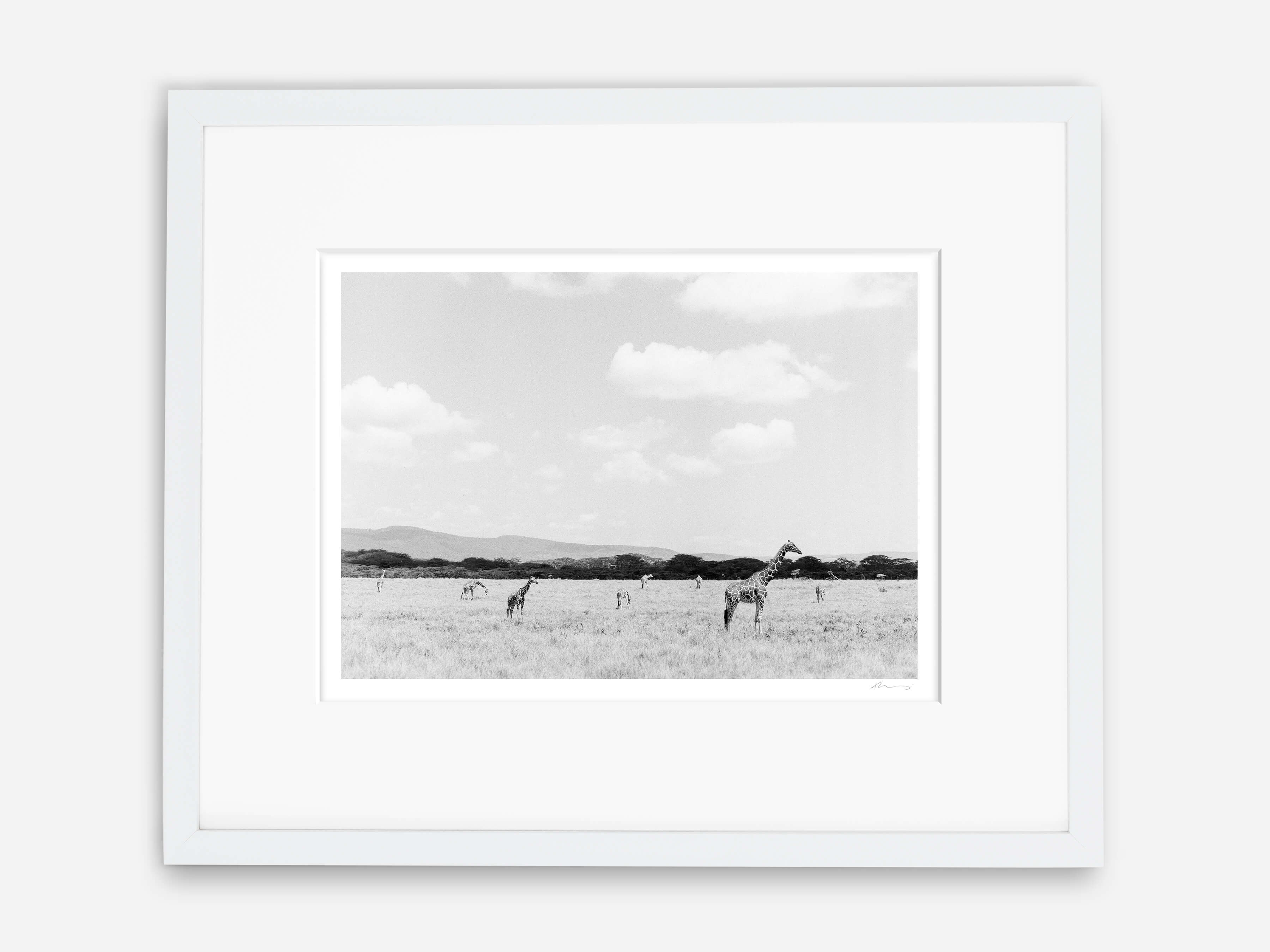 Sharing information costs us nothing nowadays. More than ever before, we have the ability to reach many people in our lives and let them know about the issues that matter to us. The only way to save the giraffe species is to bring more support to the cause.

Share this post (or others like it) using the buttons below to inform your friends and family about the disappearing giraffes. If we all take one small action, we can begin to stop this tidal wave of extinction and preserve these beautiful animals for future generations.